LINK currently trades over a crucial horizontal range. However, its trend direction in the long-term will depend on whether it turns bearish or remains bullish from hereon. Early last month, LINK turned bullish after hitting the $14 lows. This bullishness was important because it had established a higher low than its price six months earlier.

More importantly, it proved the signals right as the $19 level acted as support. Asides from July, when LINK traded below that $19 level, it didn’t fail to trade below it throughout last year. Hence, if it trades below it now, it indicates that it is poised for a longer-term correction.

There are mixed signals on the short-term charts. The rising MACD, RSI, and other signals on the 24-hour chart indicate bullishness. The MACD is almost positive, while RSI is over 50 (the point that often denotes bullishness). Also, the coin now trades around the $22 horizontal region following a breakout from a dipping resistance line.

Conversely, the 4-hour chart indicates that LINK has fluctuated within the rising parallel channel since early last month. Usually, any coin trading within this channel is undergoing a major price correction. 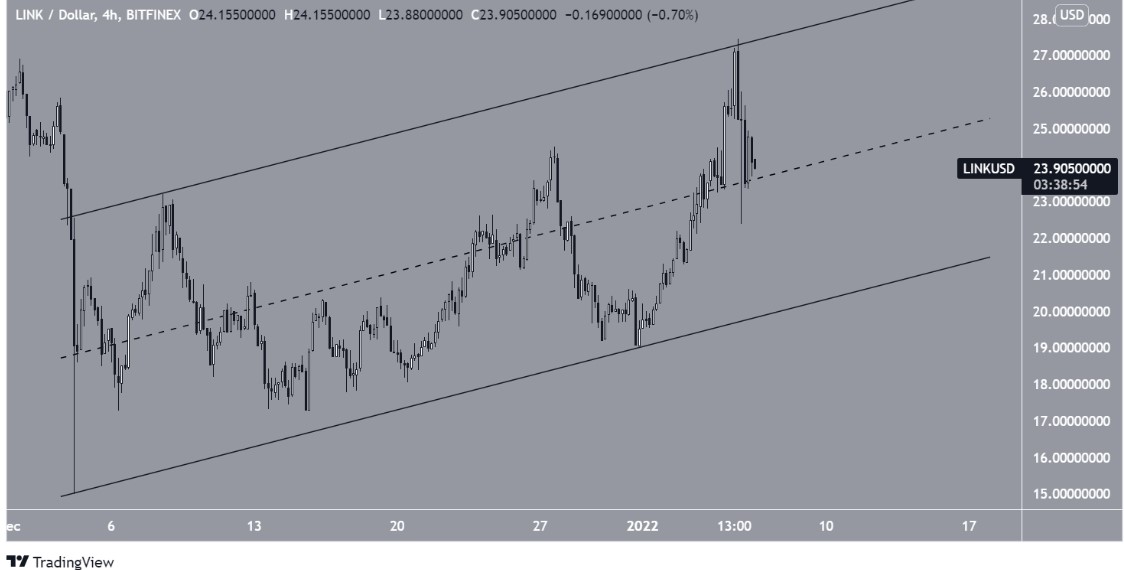 LINK at the midpoint of the parallel channel. Source: TradingView

Hence, a breakout will happen sooner or later. As of this writing, LINK is trading around the midpoint of this channel. A dip below this point would signify a selling pressure and a possible breakdown.

Popular twitter crypto analyst and trader (@altstreetbet) opined that LINK has finished a corrective phase and will be pushing to hit crucial resistance levels. Using a tweet image above, the analyst explained that LINK had completed an A-B-C corrective shape, particularly as there is a crossover between the current and high and lows.

Your influencer is asking you to be cautious at the obvious bottom. While many alts are leading the market.$LINK https://t.co/e6whijlxyD pic.twitter.com/3ksAFzZidE

Consequently, LINK’s immediate resistance level would be the $42 region. But, LINK must not trade below the $15 level for this analysis to be valid. The readings from the short-term charts indicate that this possibility may not become a reality. LINK has been bullish since the start of this year, reaching up to $27.7 two days ago, but as of this writing, LINK trades at $24.17.

Whalestats data has revealed that crypto whales have been accumulating more LINK tokens over the past 24 hours. The data confirmed that nearly 840m LINK tokens (valued at about $22m) had been purchased within the period mentioned above.

The data identified eight whale transfers, with six done by a 35th-ranked Ethereum whale. One of the remaining two purchases was made by a top three Ethereum whale who bought 2m LINK tokens (valued at about $4.84m). The last whale purchase was by a 293rd-ranked ETH whale who snapped up 1.24m LINK tokens (valued at $2.95m). The data further revealed that among the top 1000 eth wallets it has monitored, LINK is the most traded digital asset.