The second biggest stable coin globally, USDC, has been enjoying a relatively meteoric rise in market valuation over the last few years. February 1 has been the most monumental for stablecoin as it surpasses $50 billion in market capitalization.

Circle Inc., the creator of the USDC, is reported to have minted up to 100 billion USDC to keep up with the frequent upward trend of the coin in the market. The bullish market trend seems to have been a regular feature of the USDC because such a market move is remarkable and consistent with market forces.

In another move to improve its consistent market performance, Circle has, on February 17, announced the termination of its previous business deal and agreed to a new and improved partnership with Concord Acquisition Corp.

The new deal gives Circle a whopping $9 billion in valuation, two times the previous agreement with Concord last year. The new agreement has doubled the circulation of the USDC, reaching its peak at $52.7 billion as of February 17.

According to Circle’s co-founder, Jeremy Allaire, the massive steps recorded by Circle over the years through digital currencies and the internet to improve the development of the global economy are appreciable, and the new partnership is set to see Circle surpass the previous achievement.

What The New Deal Mean To The Partners

The improved agreement between Circle Inc and Concord Acquisition Corp has an initial expiration period with an end date of December 8, 2022, to be extended to the last day of January 2023, subject to meeting some specified conditions. It will later be enlisted on the stock exchange floor in New York.

Both boards of directors of the two parties approved the agreement, with the chairman of the Concord team, Bob Diamond, expressing optimism about the deal. According to him, Concord’s management believes that the attractiveness of the new agreement is that it gives Concord’s stakeholders room for participation in doing business with Circle. As such, it is a win-win deal for both parties.

Further details of the partnership will be made public on the Securities and Exchange Commission (SEC) site after both teams fill out and submit the 8-K Form. The public will know more about the deal when the SEC is through with the paperwork.

Circle also agreed with its counterpart Concord about the deal’s positive feelings for both parties. Going by the USDC’s performance as the second-largest stablecoin in the digital currency market, the partnership is seen to be the beginning of a more fruitful business. Both parties are pretty sure of the success of the joint venture.

According to Glassnode, the percentage of USDC’s supply in smart contracts reaches an all-time high for a month at 42.617%. 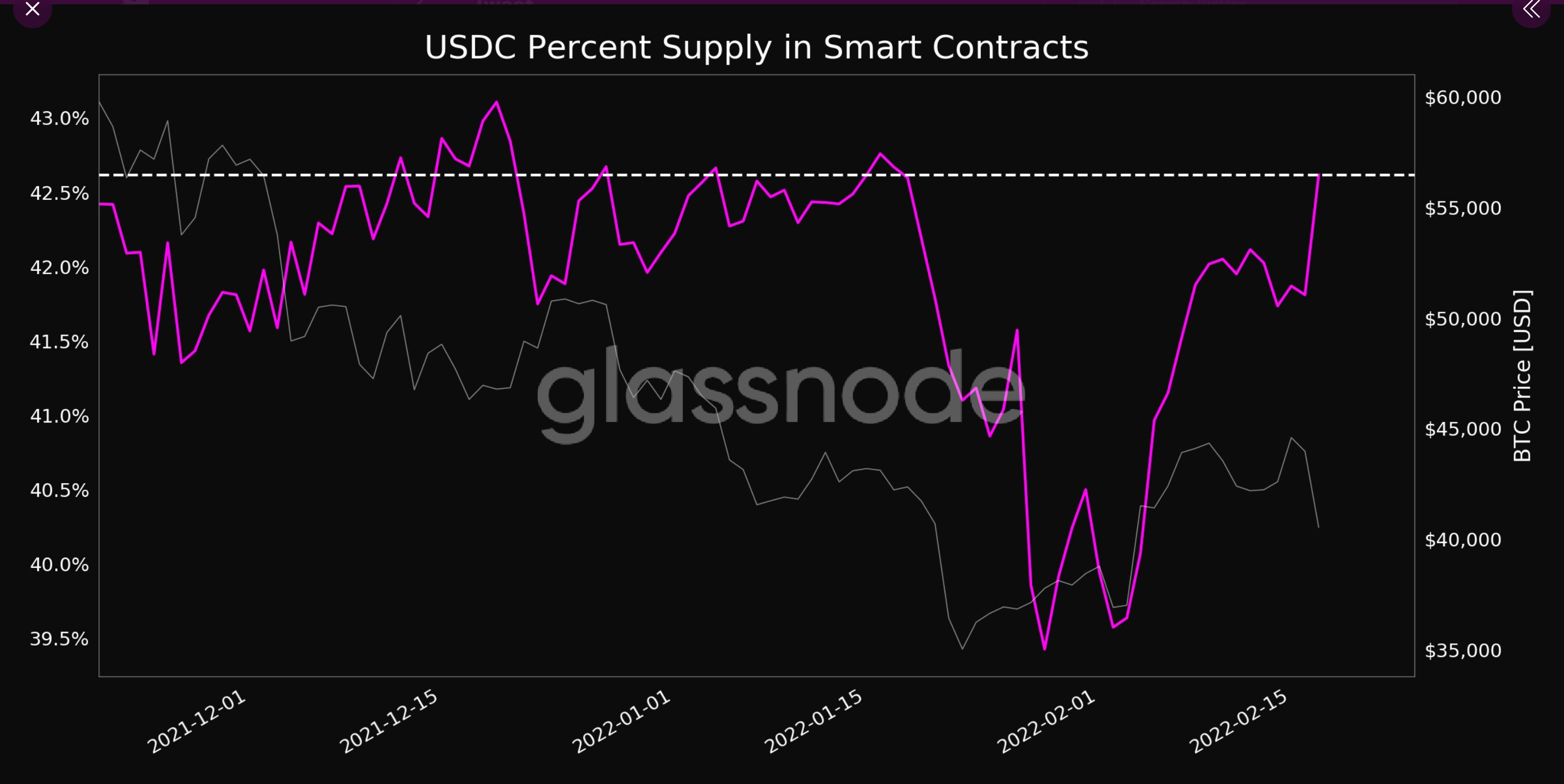 The chart above indicates that the last one month’s high of 42.192% was recorded last month, signaling the neutral zone of both the bearish and bullish forces. No extreme movement up or down is expected to occur during this period.

A New Partnership Ripple looks to expand its reach by teaming up with Lithuanian company FINCI. Ripple will make available RippleNet’s ODL services that use XRP to link two currencies, which reduces the cost of operations and speeds up transactions compared to traditional ways. The collaboration rests upon the use of RippleNet’s international payment network […]